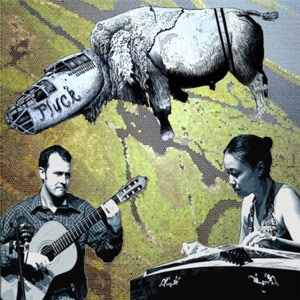 Pluck is a new string duo formed by Wu Fei (guzheng / vocals) and Gyan Riley (guitar) in the summer of 2011 in New York City.

Not long after being introduced by composer/producer John Zorn, they kicked off their collaboration with a series of shows at The Stone, Barbès, and the Museum of Modern Art.

Both Wu and Riley are classically trained performers and composers who have also embraced various improvisational styles. After the duo’s first performance, the New York Times noted how “Few stylistic boundaries are left intact in this collaboration.” Together they draw on a huge variety of traditions, including jazz, Indian raga, and Chinese, Spanish, and Western classical music. In previous projects, the artists have also collaborated with musicians such as Zakir Hussain, Bela Fleck, Fred Frith, John Zorn, and Terry Riley.